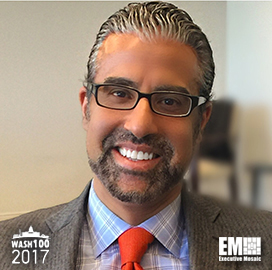 Executive Mosaic is honored to introduce Ramzi Musallam, CEO and managing partner of Veritas Capital, as an inductee into the 2017 edition of the Wash100 — Executive Mosaic’s annual selection of influential leaders in the government contracting arena.

New York City-based Veritas is a private equity investment firm focused on government and technology with approximately $9 billion under its management.

Veritas says it has completed close to 75 acquisitions at an aggregate transaction value of at least $15 billion.

In January of this year, Veritas announced its agreement to buy the $1 billion government information technology services business of Harris Corp. for approximately $690 million in a transaction scheduled to close in the second quarter of 2017.

“Harris’ government IT services business is a differentiated platform serving a mission critical role to its government customers,” Musallam said at the time.

“We look forward to leveraging our extensive experience in the government services market to support the Company’s management team and highly skilled employees as they target new opportunities in both core and adjacent markets to grow the business.”

One month later, Veritas completed efforts to raise its sixth fund for investments in technology-focused middle-market companies that work with government-related and leading commercial customers in the areas of aerospace and defense, national security, technology, communications, energy, education and healthcare.

The firm collected $3.55 billion for Veritas Capital Fund VI to exceed its target of $3 billion within four months.

In June 2016, Veritas acquired for $820 million the business formerly known as Verisk Health that now operates as Verscend, a provider of data, analytics and advanced technologies to government and commercial healthcare customers.

Two months prior to that transaction, Veritas sold another of its healthcare technology portfolio companies Truven Health Analytics to IBM for $2.6 billion.

Musallam’s career in the private equity arena includes roles at Pritzker & Pritzker and Berkshire Partners, while he started his career at JP Morgan under the banking company’s structured finance division.

Executive Mosaic congratulates Ramzi Musallam and the Veritas Capital team for their selection to receive this award.