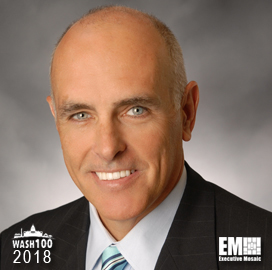 Executive Mosaic is pleased to announce Paul Smith, vice president and general manager of Red Hat’s Public Sector, has been inducted into the 2018 edition of the Wash100 — Executive Mosaic’s annual selection of the most influential voices in the government contracting arena — for driving open-source software solutions for government agencies and system integrators. He is also a 2017 recipient.

“Open-source technology is the best source for choice and security,” Smith told attendees of the company’s annual Government Symposium in January. “Open-source is not only behind many of the technology industry’s most significant innovations, but it is also pervasive across the U.S. government.”

Addressing challenges in the information technology space, Smith cited Red Hat’s Kubernetes open-source platform as a way to mitigate these. “[It] works to automate the management and deployment of container applications, and a component of the company’s container application — the OpenShift Container Platform — to carry out government IT programs.” Both the platform and container application served as the basis for a November-announced partnership between Red Hat and Radiance, to support the U.S. Air Force‘s cloud migration.

“Given the breadth and complexity often involved in defense IT, the capability to more easily build cloud-native applications, deploy them and manage these workloads in a single platform can be important,” said Smith in the release.

In December, Red Hat won a new certification for its Linux 7.1 operating system, awarded through Germany’s federal information security office. The certification was granted to the Linux platform for sensitive or critical systems, bolstering its existing Evaluation Assurance Level 4+ designation.

Prior to joining Red Hat in 2004, Smith was vice president of government operations at Veritas. He has also held positions at Oracle and Unisys in aerospace, defense and the public sector.