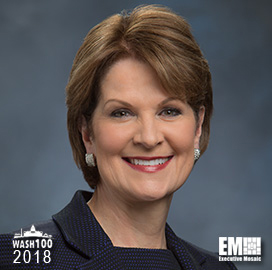 Executive Mosaic is pleased to introduce Marillyn Hewson, chairman, president and CEO of Lockheed Martin, as an inductee into the 2018 edition of the Wash100 — Executive Mosaic’s annual selection of influential leaders in the government contracting arena — for operational excellence in overseeing the F-35 program and leading her organization to stellar financial performance in 2017. This marks her fourth consecutive year receiving the award.

Hewson announced last March that Lockheed plans to decrease the price of F-35A planes to $85 million or less per aircraft by 2019, per its goal to save over $5 billion in the program. At the time, she said she expects F-35s to drive the growth of Lockheed’s international sales to 30 percent over the next few years.

To that end, Japan indicated Tuesday it plans to purchase more than 20 additional F-35A fighter jets from Lockheed over the next six years, with each plane estimated to cost $100 million. Japan’s air self defense force originally bought 42 F-35As, but it may elect to not assemble them in-country and could buy them direct from the company for its next order. Additionally, in November, Germany’s air force asserted its preference for the F-35 Joint Strike Fighter to replace 85 Tornado jets by approximately 2030. The country seeks a fifth-generation platform that isn’t easily detected by radar and can engage targets from long distances.

Also in November, Lockheed entered a potential $1.6 billion deal to upgrade the United Arab Emirates’ F-16 fighter aircraft fleet. In the same month, the company engaged in a research and development initiative with King Abdullah University of Science and Technology to support Saudi Arabia’s Vision 2030 objectives. The partnership is expected to yield new platforms and technologies across multiple industries and cultivate future leaders. According to Hewson, Lockheed has seen increased demand from Gulf countries worried about regional security, especially for air and missile defense systems.

In a January call to investors, Hewson touted impressive performance milestones. As she puts it, “2017 was an exceptional year of achievement with strong operational results and new historical high watermarks for sales, orders and cash from operations. We were pleased to see our 2017 sales eclipse $51 billion, representing growth of 8% over 2016 results.” She added that the company ended the year “with approximately $100 billion in backlog.” Notably, each of Lockheed’s four business areas (aerospace & defense, energy, space and emerging technologies) surpassed last year’s earnings, with aeronautics leading the charge due to an 18% increase in the F-35 program.

With over thirty years’ experience at Lockheed, Hewson was elected to the 2018 Aerospace Industries Association’s board of governors, and received the 39th Howard Hughes Memorial Award from the Aero Club of Southern California earlier this month. “[Hewson] exemplifies the spirit of this award through her bold leadership and significant contributions to driving innovation in aerospace,” said Aero Club President John Stammreich in a statement.

Executive Mosaic congratulates Marillyn Hewson and the Lockheed team for their selection to receive this award.