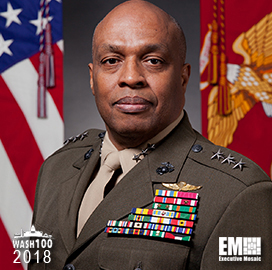 Stewart officially assumed his Cybercom post in October 2017, four months after his nomination. Before that, he served for two years as director of the Defense Intelligence Agency and commander of the Joint Functional Component Command for Intelligence, Surveillance and Reconnaissance under United States Strategic Command.

As DIA chief, Stewart appeared before the Senate Armed Services Committee in February 2016 and cited malicious intrusion, transnational terrorism, regional security issues and hostile foreign intelligence activities as major threats to the U.S. and its allies. In his testimony, he expressed concern over state actors seeking access to the Defense Department’s networks and systems in order to gain an asymmetric advantage.

“International progress toward agreement on accepted and enforceable norms of behavior in cyberspace may provide an opportunity to limit the scope and scale of nation-state cyber activities and establish parameters for deterrence of malicious cyber operations,” Spencer noted. “However, non-state actors’ use of cyberspace to recruit, propagandize and conduct open-source research will endure as an enabler to their global decentralized operations, and the potential exists for a ‘lone wolf’ cyber-attack,'” he added.

During the DIA’s change of directorship ceremony in October 2017, he called on the DIA workforce to “speak truth to power” amid challenge and adversity. “Speak truth through your actions … your analysis … tradecraft and standards,” Spencer said. “Never lose sight of it, because unless we are forthright, honest and candid we cannot fulfill our oath.” At the event, Deputy Defense Secretary Pat Shanahan commended Stewart for strengthening integrated intelligence centers at combatant commands, modernizing operational capabilities to enhance lethality and improving the Defense Debriefing Service to make previously unknown threats known.

The four-time Wash100 recipient previously served as commander of Marine Forces Cyber and director of intelligence at Marine Corps Headquarters. Stewart is a recipient of the Defense Superior Service Medal and the National Intelligence Distinguished Service Medal, among other military decorations.

Executive Mosaic congratulates Lt. Gen. Vincent Stewart and the Cybercom team for their selection to receive this award.