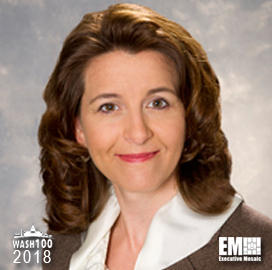 Executive Mosaic is pleased to announce Kathy Warden, Northrop Grumman’s president and chief operating officer, has been inducted into the 2018 edition of the Wash100 — Executive Mosaic’s annual selection of the most influential voices in the government contracting arena — for leadership in overseeing a major, $9.2 billion acquisition. This marks her third win.

Warden was named to her current role in September 2017, but didn’t formally assume the title until the start of 2018. The change was part of a senior leadership transition after Gloria A. Flach, chief operating officer, and Sid Ashworth, corporate vice president of government relations, announced their decision to retire.

“As we prepare for integration, we are making good progress in our plans to combine our two outstanding companies after close,” she said in a January call to investors. “Maintaining this leadership team will ensure operational continuity and facilitate the integration of our two companies.”

Last year, Northrop secured several major contract wins including: a three-year, $328 million award in August to execute technology maturation and risk-reduction activities on a ground-based, intercontinental ballistic missile system for the U.S. Air Force; a $750 million win in December, with eight options extending until 2027, to provide lifecycle services for the U.S. Army‘s fixed-wing airborne intelligence, surveillance and reconnaissance fleet; and another Army contract in November, worth potentially over $500 million in task orders, to operate training centers in the U.S.

Warden previously served as the Falls Church, Va., contractor’s corporate vice president and president of its information systems sector. She was named to FCW’s 2015 Fed100 list for bringing in FY2014 cyber contracts worth $1.5 billion.

Executive Mosaic congratulates Kathy Warden and the Northrop team for their selection to receive this award.