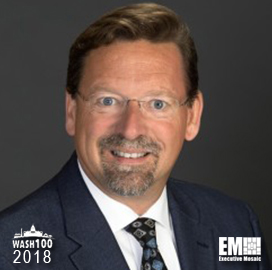 Executive Mosaic is honored to introduce Chris Marzilli, president of General Dynamics‘ mission systems business, as an inductee into the 2018 edition of the Wash100 — Executive Mosaic’s annual selection of influential leaders in the government contracting arena — for his ability to deliver mission support while maintaining operational excellence for U.S. military customers.

Marzilli currently leads General Dynamics Mission Systems, which was formed through the integration of General Dynamics’ C4 systems and advanced information systems divisions. He was appointed to his current role after serving as president of the C4 systems business.

Mark Rayha, GDMS vice president and chief financial officer, told ExecutiveBiz in a November 2017 interview that Marzilli is the right person to lead GDMS. “[Chris] sets the expectation and discipline on both people and operational excellence across the breadth and depth of the company,” said Rayha. “This rich, globally-diverse culture encourages long-term growth, a constant inflow of new ideas and innovation balanced by trust, honesty and transparency. I believe that is what differentiates us from our competitors.”

Under Marzilli’s leadership, GDMS took part in several major transactions last year. His unit received a potential five-year, $208.9 million contract in December 2017 to produce, test and deliver AN/USC-61(C) digital modular radio systems and high-frequency distribution amplifier group components to the U.S. Navy. In August 2017, GDMS won a potential $104.9 million contract to produce common aviation command-and-control systems for the U.S. Marine Corps; and, in May 2017, the company purchased Advatech Pacific‘s electronics and communications division to grow its cybersecurity technology and service offerings for intelligence and defense clients. In the press release, Marzilli commented that “the addition of Advatech Pacific’s cross-domain security products will give our customers a more secure and trusted information advantage.”

The business unit secured a $125.6 million follow-on contract from the U.S. Coast Guardin October 2016 to deliver program management, sustainment engineering, system support and maintenance for the agency’s Rescue 21 search and rescue program. “Rescue 21 Coastal has been a game changer in transforming how the Coast Guard conducts SAR operations,” said Marzilli. Recently, he noted the U.S. Coast Guard has conducted approximately 100,000 SAR operations since 2006 with support from the program.

Executive Mosaic congratulates Chris Marzilli and the GDMS team for their selection to receive this award.