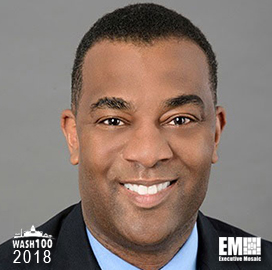 Executive Mosaic is pleased to announce that Xavier Williams, President of Public Sector and Wholesale Solutions for AT&T Global Business, has been inducted into the 2018 edition of the Wash100 — Executive Mosaic’s annual selection of the most influential voices in the government contracting arena–for his noteworthy accomplishments in executive management, handling critical assignments and improving the customer experience worldwide.

Williams, a 28-year industry veteran, is known as a game-changer in the AT&T Business sector, largely due to his influence and impact on consumers in corporate America and his collaborative nature in the management of teams and client services.

“I have charged those that I manage to find out how they can serve customers better and faster,” he said in a comment regarding the influential mentors and sponsors within the company whom had played a role in guiding his career. “I tell them that the customer experience should not exceed the employee experience. If you are not taking care of employees, they won’t take care of customers.”

Within the past year alone, he has been recognized more than once for his work on improving STEM education for the youth and promoting diversity through the National Urban League, a community-based nonpartisan civil rights organization based out of New York City. Proud of his Pittsburgh ties, Williams played an active role in helping to organize the Urban League of Pittsburgh Young Professionals group, landing him a spot on the 2013 Diversity MBA Top 100 Under 50 Diverse Executive Leaders by Diversity Magazine.

Giving back to society, according to Williams, is just a symptom of helping others, paying it forward in-effect from a multinational telecommunications company to the streets of Pennsylvania‘s industrious city.

“You can’t limit yourself,” he stresses. “Whatever you want to do, you can’t quit until you accomplish it. Don’t be scared to fail or to be great.”

A rising star burning bright on the industry starscape, Williams earned his right last year to join the ranks of BLACK ENTERPRISE’s Most Powerful Executives in Corporate America.

“I have what I would call a general manager background. I have worked in sales, service, finance, and HR. I have tried to bring together all those disciplines to be able to look at a customer holistically and solve problems with all AT&T has to bear,” said Williams. “The simple message that I learned in grad school was to learn to build it, learn to sell it, and learn to count it, and I have built my career around those areas.”

Empowering those around him left and right, Executive Mosaic is proud to present Xavier Williams and his team at AT&T’s Public Sector group with this award.