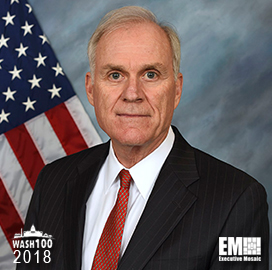 Executive Mosaic is honored to announce Richard Spencer, secretary of the U.S. Navy, as the newest inductee into Wash100 — Executive Mosaic’s annual selection of influential leaders in the government contracting arena — for his leadership in strategic readiness and his military insight into maritime security.

Spencer officially assumed his current post in August 2017 two months after his nomination. In September 2017, he ordered a 90-day strategic readiness review to assess the service’s disaster response procedures in response to ship collision incidents in the Pacific.

During that time, Spencer announced plans to meet with companies to gather insights into how the private sector responds to maritime disasters.

“We’re going to [look at] this as best practices for people who have come out the other side,” said Spencer said then. “We really do expect this to be a learning experience as we’re set to go forward.”

“Multiple demands will require prioritization, but this mission must be in the top priority category for these ships, reversing the prior decision to eliminate support [to SOUTHCOM],” Spencer wrote in a Dec. 5 memo to the chief of naval operations. “Since the training areas are close to the operational areas covered by the Task Force, it is likely possible that part of the training profile can be real maritime security tasks likely to be encountered many places in the world.”

Prior to his current position as Secretary of the Navy, Spencer served as managing director of consulting firm Fall Creek Management. He is the former president of venture capital firm Crossroads Investment Management and former chief financial officer of Intercontinental Exchange. Spencer currently serves as vice chairman of the Marine Corps Heritage Foundation and sits on the board of directors of companies such as Global Atlantic Financial Group and StarPound Technologies.

Spencer served in the United States Marine Corps as an H-46 pilot.

Executive Mosaic congratulates Richard Spencer and the U.S. Navy for their selection to receive this award.