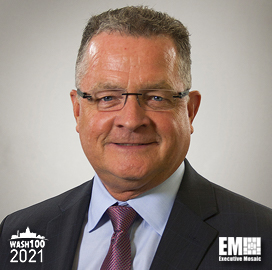 Executive Mosaic has announced that David King, group president for Dynetics at Leidos, has received the first Wash100 Award, the most respected and coveted award in all of government contracting (GovCon), of his long career in the federal sector for his leadership and innovation as Dynetics works to expand the Leidos Innovations Center“™s technical capabilities.

“David King, former CEO of Dynetics and current group president with Leidos has earned his first Wash100 Award and joined his peers with this honor by way of Leidos acquisition of Dynetics in 2020, said Jim Garrettson, CEO of Executive Mosaic and founder of the Wash100 Award. “David has created a critically important new component of Leidos“™ strategic acquisition and expansion plan that launched the expectations for Leidos into orbit…literally.“

King has accumulated more than 35 years of experience in space systems development and operations in the federal sector. He served as the CEO of Dynetics and was a member of its board of directors between June 2015 and Feb. 2020.

Leidos finalized its acquisition of Dynetics for $1.65 billion in Feb. 2020 to expand its technical capabilities, strengthen its presence in defense, civil and intelligence markets and advance opportunities within the Leidos Innovations Center (LINC).

Since then, King has operated the company as a Leidos“™ subsidiary and oversees LINC, which accommodates Leidos“™ science and technology-related work with the Intelligence Advanced Research Projects Agency (IARPA) and the Defense Advanced Research Projects Agency (DARPA). He reports to Roger Krone, chairman and CEO of Leidos, as well as a fellow 2021 Wash100 Award recipient.

“Dynetics and Leidos share a commitment to advancing technology to address the toughest scientific and engineering challenges of our day. This combination adds innovative capabilities in our targeted growth areas, while expanding our secure agile production capabilities, secure agile manufacturing, and increasing our penetration with key customers,” said Krone.

David King stressed the acquisition as a positive for Dynetics as well as its employees. He was clear that the majority of the company“™s work is developed for the Department of Defense (DoD) and the company“™s capabilities in hardware and systems would provide innovative solutions for Leidos to continue its work with the U.S. Army, Navy, Air Force and other key federal agencies.

“We found Leidos to be the kind of company that we want to be a part of and it was time, it was just the right time for a lot of reasons,” said King. “We are going to continue to grow and do better and better things for our customers.” he added.

Prior to his role as Dynetics CEO, King joined the company in April 2009 as its executive vice president. He has also served as the center director for NASA“™s Marshall Space Flight Center (MSFC) between 2002 and 2009. He was responsible for overseeing 7,000 onsite employees and contractors and a $2.7 billion budget.

King is also a former Space Shuttle launch director and director of Shuttle Processing at the Kennedy Space Center in Florida.  He played key roles in more than 100 space shuttle missions during his tenure at NASA and led the Columbia Recovery team following the Columbia accident.

Executive Mosaic congratulates Dynetics, Leidos and David King for receiving the first Wash100 Award win of his long federal career. King“™s commitment to Dynetics“™ employees, the federal sector“™s technological capabilities and the growth of the GovCon sector have earned him the most prestigious award in the GovCon industry.