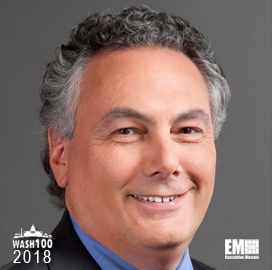 Tony Moraco, CEO of SAIC, Added to 2018 Wash100 for his Sound Financial Leadership and Company Positioning Executive Mosaic is honored to announce Tony Moraco, CEO of SAIC, as an inductee into the 2018 edition of the Wash100 — Executive Mosaic’s annual selection of the most influential voices in the government contracting arena — for his leadership in financial performance and company positioning.

“The federal civilian customers have reacted to the rhetoric around reductions in that part of the federal government, as we’ve seen the promotion of spending in the defense and intelligence sector, given the national security interest,” Moraco told analysts during an earnings call. “We’re seeing the program managers and contract administrators reacting to that and protecting their budget lines with an indication that they may be lower than they have been in the past.”

It is his belief that demands for IT modernization, increased cybersecurity measures and adoption of cloud platforms are, and will be, on the rise among agencies and organizations alike.

“As we look at it, whether it be through executive order(s) or through government compliance, there is continual demand to upgrade legacy systems,” he added.

Moraco has led SAIC since 2013, when it broke off from former parent company Leidos. Under his leadership, the company was able to position itself for strong organic sales growth in the years to come, following its acquisition of Scitor for $790 million.

“Collectively, we’re all looking at this modestly favorable outlook for the next five years. Although we’re at the front end of that cycle, it still takes time to convert that,” he said in a comment.

The future for the company–with Moraco and his team at the helm–looks promising, as SAIC continues to supply the nation’s military with contracts and cutting-edge prototypes for rapid deployment on the battlefield.

“While federal government macro level priorities are likely to shift somewhat, our long-term outlook remains the same with expected modest growth in our markets for the next few years, consistent with our long-term financial targets,” said Moraco.

Executive Mosaic congratulates Tony Moraco and the SAIC team for their selection to receive this award.